After visiting the beautiful places in Tbilisi and getting to know the city a little better, we booked a taxi and went to the region of Kakheti, which is famous for its grape harvest, and thus its wine.

The first stop on our tour was a visit to the nunnery Bodbe, where there is the tomb of St. Nino, which, as previously mentioned, brought Christianity to Georgia. It is a quiet and well-kept place, the order of which is kept by nuns themselves. Walking through the area, you can get a boost of energy for the whole day.

In the gorge, near the nunnery, there is the St. Nino’s (“Ninos Tskaro”) wellspring of healing water, where one can take a bath. Water, however, is up to 5 degrees there.

If you did not bring swimming stuff, it is not a problem: you can buy bathing shirt near the wellspring, wearing which you can plunge. They say that if you got sick, you need to put that same night shirt and go to sleep, and then you will be sure to recover.

Next, we went to Sighnaghi. It is considered the “city of love” because there is room for the wedding there, which is open 24 hours a day, just like in Las Vegas. And marriage registered there will be valid worldwide.

Also, this city is famous for its fortress of the same name, which is part of the list of the most famous and largest fortresses in Georgia. The walls of the fortress Signakh miraculously survived and now surrounds the old part of the city going far beyond the city boundaries. The wall has 28 watchtowers, which can be risen on in order to contemplate a wonderful view of the Alazani Valley and the Caucasus Mountains.

We moved on and visited the house-museum of famous Georgian poet Alexander Chavchavadze, where materials of his life and work are gathered. The fact that this museum is worth a visit is undoubted, but more of my attention was attracted to the park near the palace. It is located on 12 acres and consists of forest belts, squares, individual and group plantings, among which, one can see exotic specimens together with the unique subtropical medicinal and technical plants.

And so, we got to the foot of the mountain where the monastery Nekresi is located. From the arch with a small church begins a steep climb up. I immediately warn you that if you’re an athlete, it will be hard for you to climb. If not, it is not worth trying. When climbing, we thought we would stay at that mountain – it was torture. But we overcame these difficulties. Halfway we were tired, and after reaching the top layer, we laid on the grass for 20 minutes coming back to life.

My advice: take the bus at the foot of the mountain, which takes you to the top and then back. We did not know about it, and for this reason it was a nightmare …

The monastery itself consists of 5 cult buildings that were built in different centuries. The oldest church in Georgia of the Basilica type was built in the IV century on the territory of the monastery. In one of the buildings of the monastery is wine storage (Manary). It is worthy of attention, and from the balcony one can enjoy a beautiful view.

The next point on our trip was the city of Telavi, which is not only the center of Kakheti, but the center of winemaking. It is a small town, there are only a few streets. In the main square, stands a monument of Irakli II, under which the truck stopped and the main character asked directions to the airfield in the movie “Mimino”. If you turn your back to the monument, you will see in front of you a 800 year-old plane tree, which cannot be embraced by even 10 people holding hands together.

On our way to Tbilisi, we stopped at a fortress called Ujarma, took pictures and drove on. 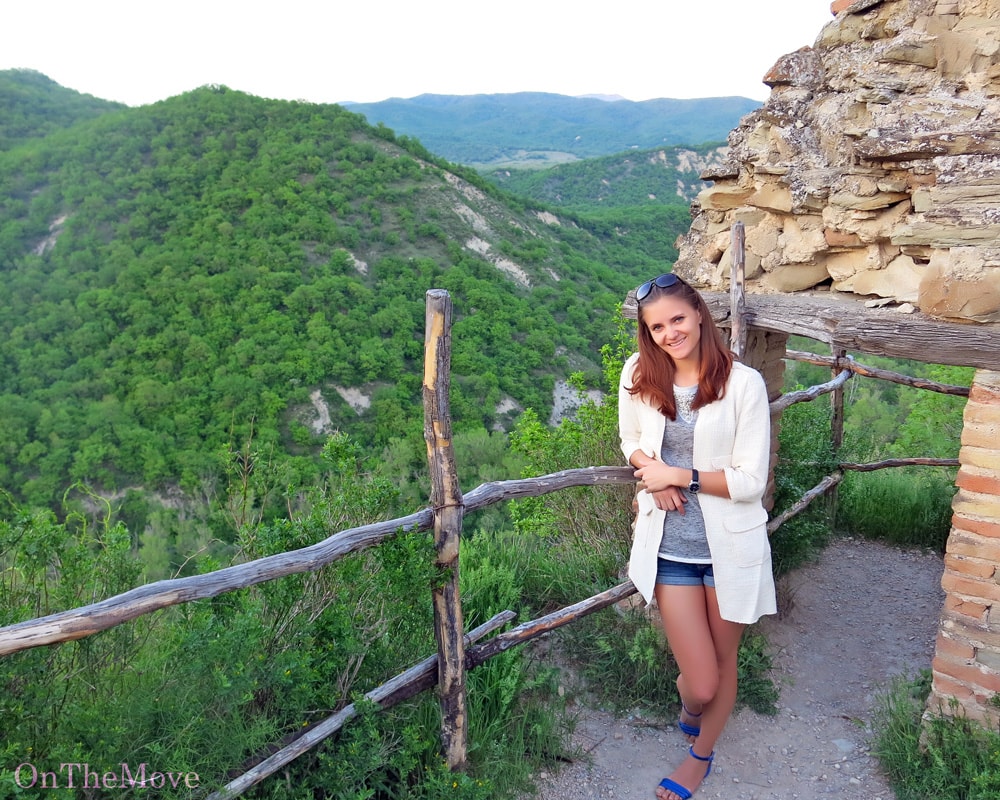 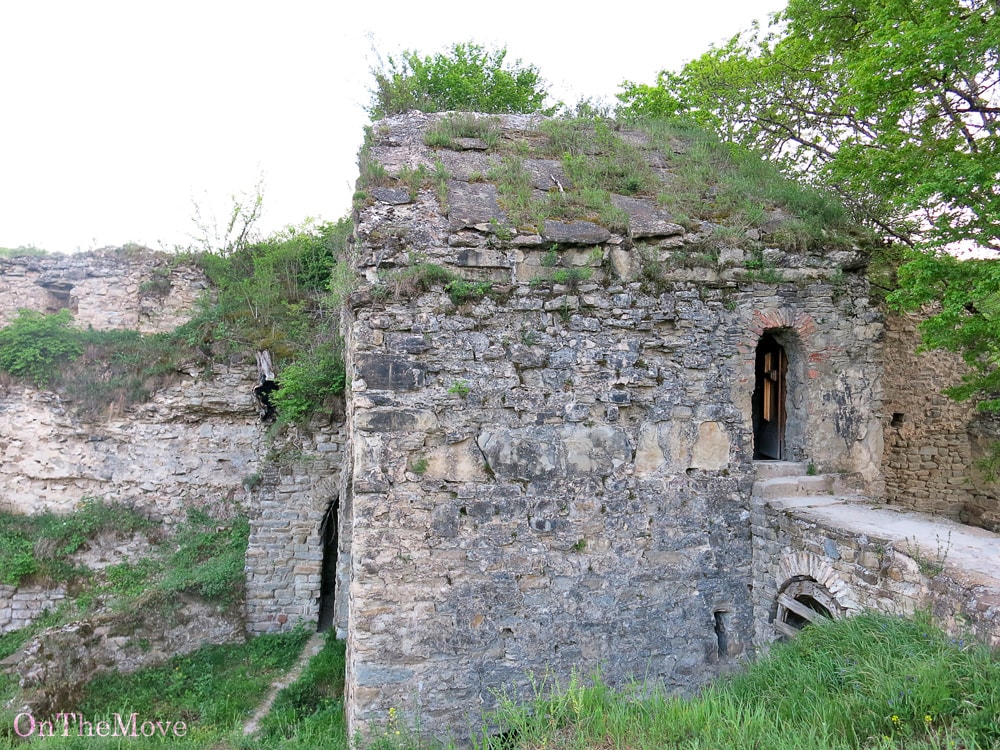 By 11 pm we returned to the hotel, where we waited for hoteliers to conduct a tour of their wine cellar. We were pleasantly surprised, because we were not even aware of the “secret” places of the hotel. Let me remind you that we found the hotel quite by accident. Mini tour included a tasting of Georgian wines and the story of how the great-grandfather of the owner of the hotel hid Stalin in these cellars, and that Beria went there on a motorcycle. We listened to stories, drank and went to sleep. 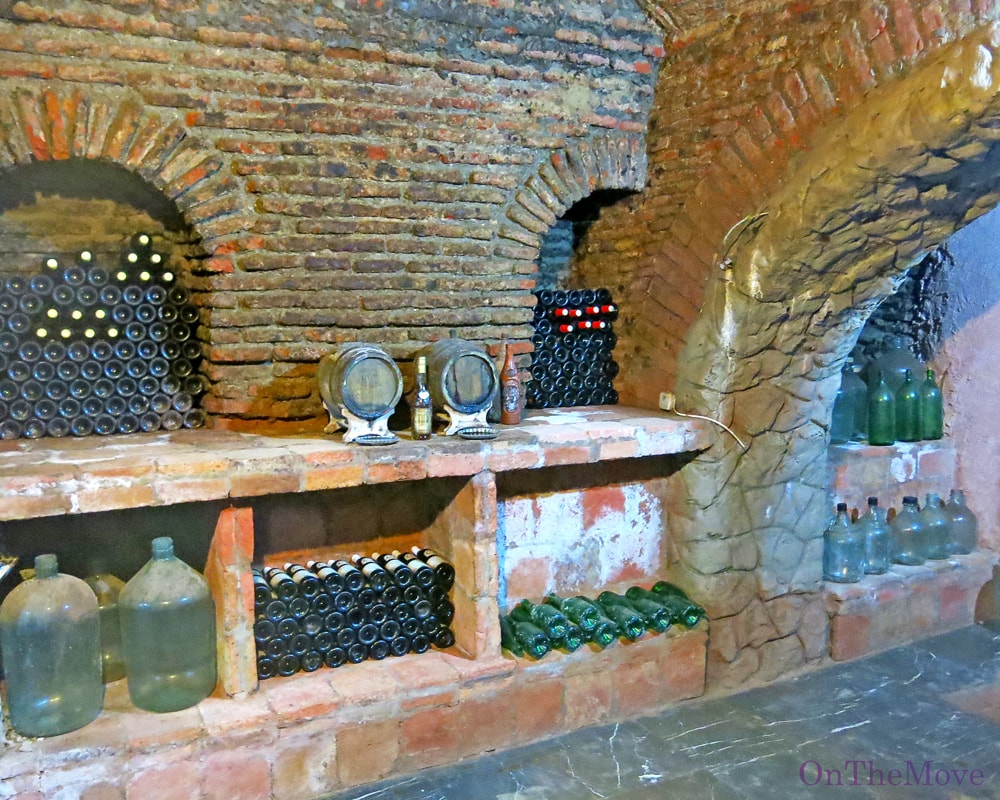 This was our penultimate day in Georgia, after which we had a flight from  Kutaisi. So we decided to take a taxi and go there, stopping on the way to all the interesting places.

The first stop on our trip was Goristsihe church, which is located near the town of Gori. In fact, we wanted to visit Uplistsikhe, but our taxi driver did not know the way and took us there. We did not regret that got to this place on May 6 (the day after Easter). Otherwise, we would never have seen how the locals were carrying animals such as sheep, goats, and even roosters, to sanctify them in the church only to cut them and make kebabs right away after coming down from the mountain. Christians behaving like pagans. And we have seen it with our own eyes. 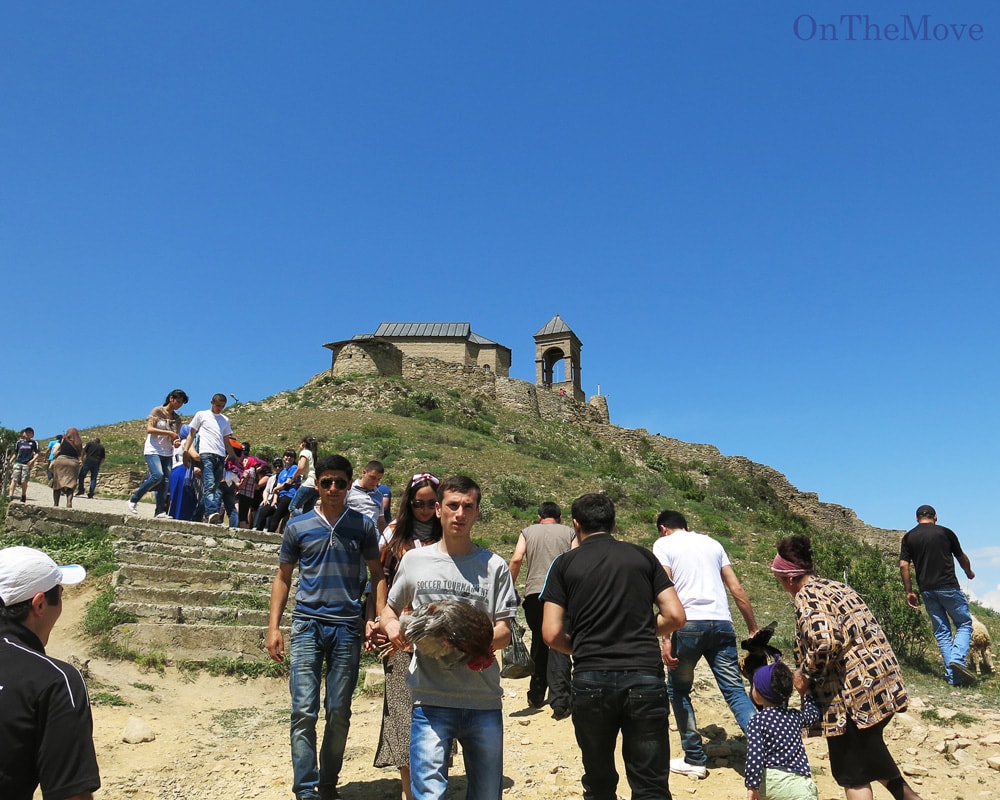 Next, we did find the cave city, one of the first urban settlements in the Caucasus called Uplistsikhe. The first caves were carved around the III century BC. This is the complex where Queen Tamara was crowned.

Our route continued through the town of Gori. It is known primarily because of its famous native – in 1879 Joseph Dzhugashvili (Stalin) was born there. The museum complex dedicated to him, consists of several elements: the actual museum, the house-museum where he was born and lived until 4 years of age and personal armored car in which Stalin traveled to Tehran and Yalta conferences. The museum features items from the personal usage of the Marshal of the Soviet Union, as well as various items given to him. 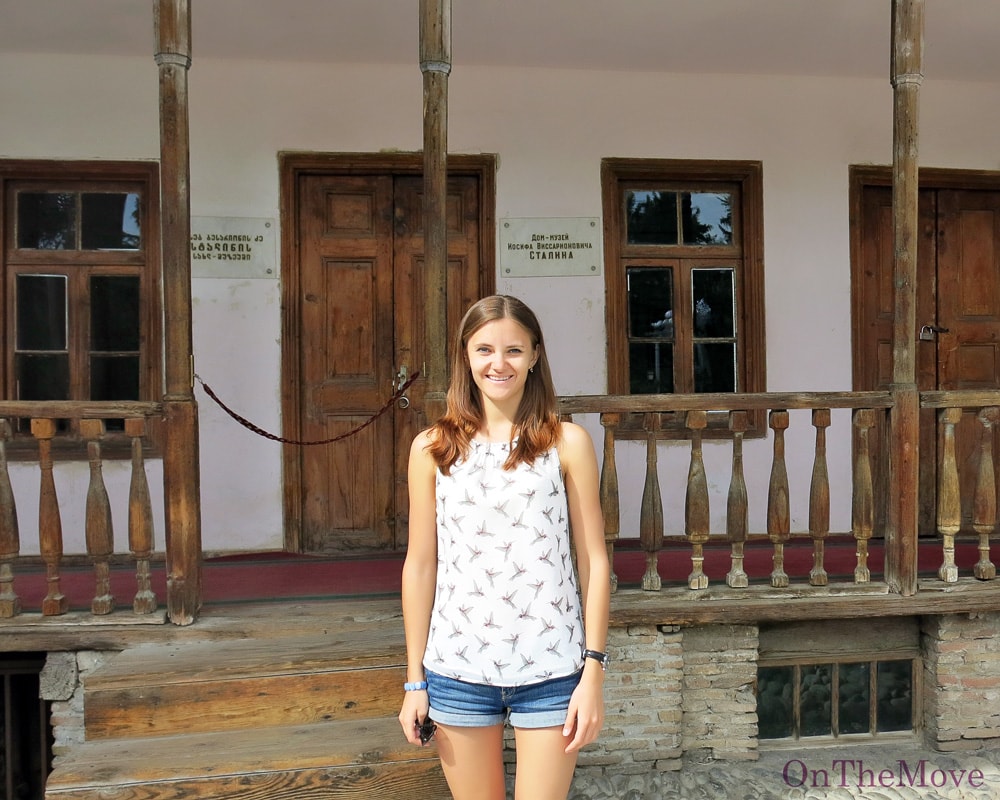 Further, our path lay through the town of Borjomi. There is a really large park there, where you can walk, and get some healing water from the wells. Oh oh! It tastes very differently than “Borjomi”, which we are used to drinking. The beverage is very concentrated and tastes pretty bad. 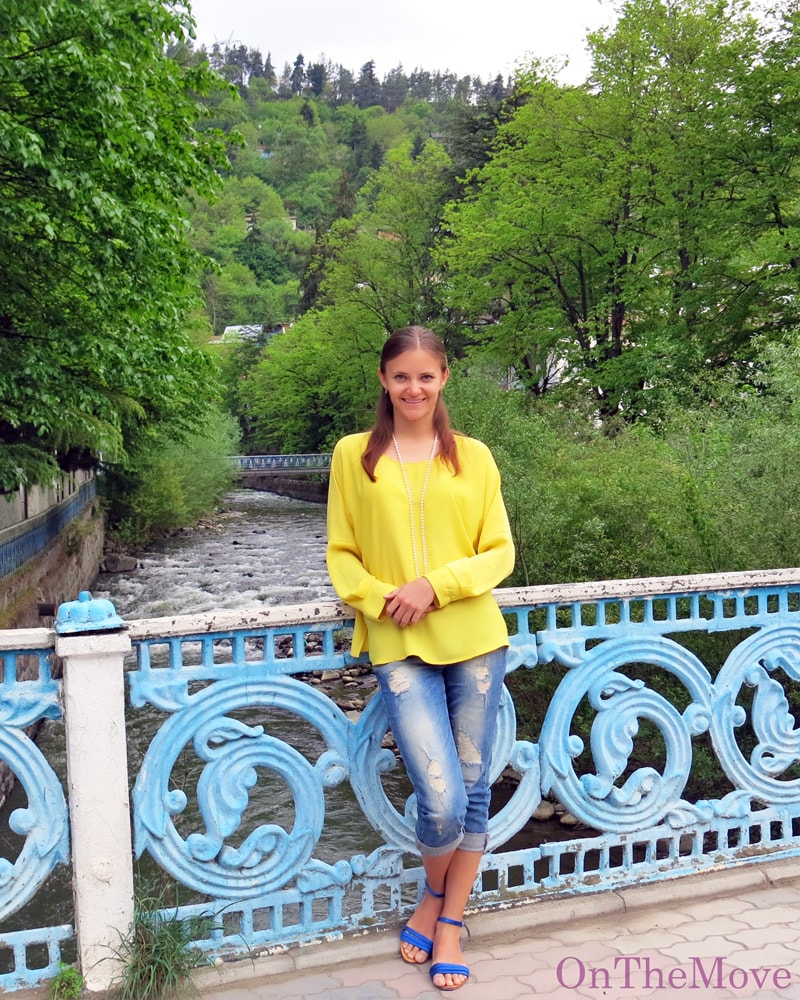 After that, we went to Kutaisi. 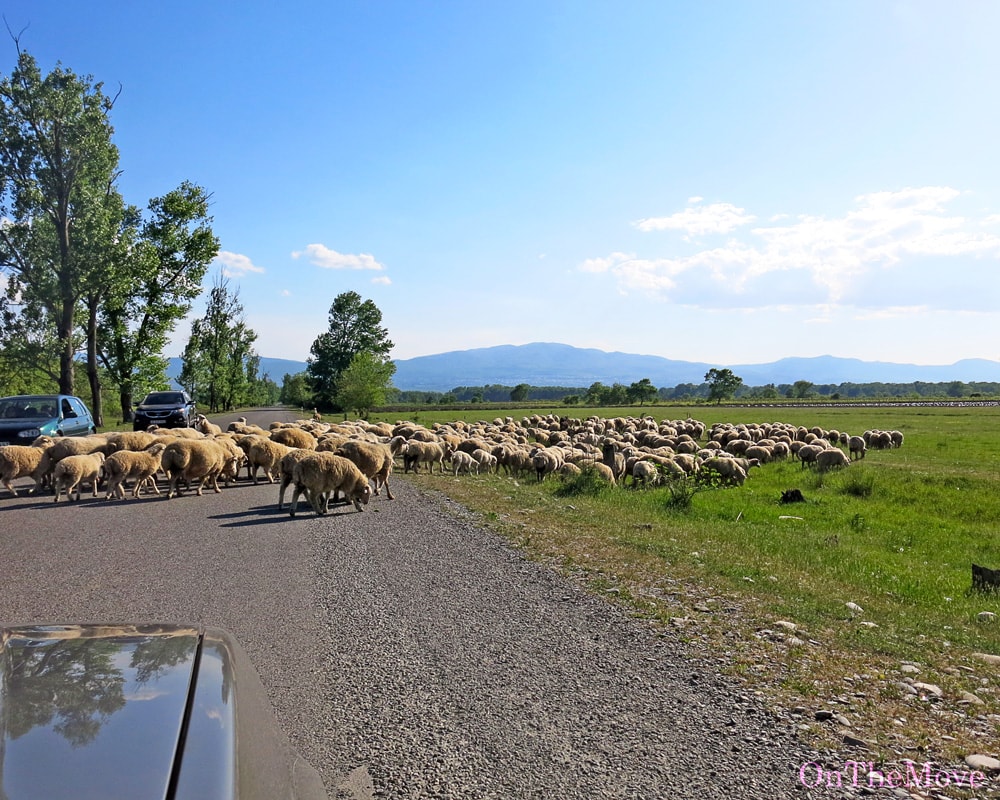 And so came an end to our stay in Georgia. We did a morning farewell walk in Kutaisi, called our “friend” taxi driver and went to the airport since the take off was as soon as at noon.

Georgia will remain in my heart forever.

What else you should visit in Georgia: